Eye of the Needle - Ken Follet 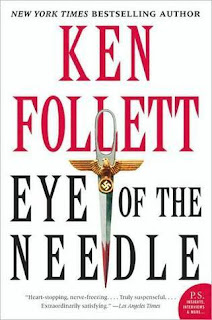 A fantastic read from a master storyteller.

Ken Follett is my guilty pleasure read. I pick him up when I feel like treating myself to some spicy, fast food like entertainment.

I was going through some heavy dose literary reads and this book turned up at a time when I was desperate for some light and easy stuff.

This is one of Ken Follett's famous works and written quite sometime back. However, the popularity of the author has ensured that his earlier books have survived as well as his latest ones.

Sometime back, I watched a Hindi movie version of the work. Though the principal characters were the same, the story had been adapted to suit the Hindi audience. I was glad to watched the movie before I opened the book. It helped me appreciate the Ken Follett's story better.

Set in the world war II, the English army is spreading false word about a large army ready for invasion. Actually it is a ploy designed to deceive the Germans. However, Needle, a German spy gets the wind of it and dashes off to inform the Germans. However, in his attempt to race from one end of the country to another he leaves behind a murderous trail. Rough weather on the sea washes him up to to Storm island, where a brave woman and her family take him in. What happens is a race against time to see if the English intelligence are able to thwart Faber or let their secret get to the Germans.

What doesn't:
A Ken Follett book with sex, adventure and action. A masala fare that offers you entertainment on a platter.