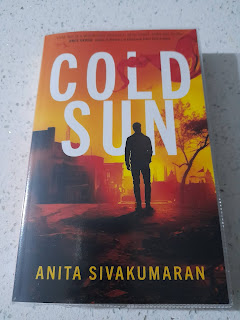 A crime novel with a Leicester detective and a spate of murders in Bangalore, India. I simply had to pick up Cold Sun to know more.

This is Sivakumaran's debut crime novel but she comes with an impressive record of poetry, short stories and novel publications. Her debut novel Queen, about the Tamil Nadu Chief minister Jayalalithaa’s rise to power was recently adapted into a web series. Her other works include feminist retelling of the mythological epics and a poetry collection apart from award winning short stories. Going by her previous works, it was easy to assume that this one would be hardhitting as the others.

Three prominent Indian women have been murdered in Bangalore. However when one of them turns out to be the ex-wife of the British Foreign minister, Scotland Yard sends DI Vijay Patel to India to help with investigation.

Patel has to battle local resentment and his ancestral country alongside Chandra Subramanium, the fierce female detective. But soon he becomes the target and Patel and Chandra must get to the killer before they become the next target.

It is a fascinating debut and definitely a great start to a series. The main characters have strong backstories and their interaction is fizzing with chemistry. A fast paced crime debut, strong on setting. 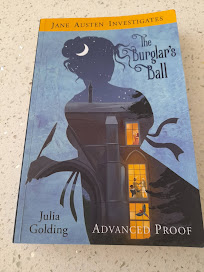 This is the second book in the Jane Austen Investigates, a delightful series aimed for readers 9+.  Having enjoyed the first book with its witty oneliners and the wordplay, this one was yet another enjoyable read. It was great to seeing characters from the previous one reappear in this one, helping the teenage detective with the case.
The plot:
Jane and her sister Cassandra have been invited to their old boarding school for an end of term dance. However they find themselves in the middle of action when an expensive piece of jewellery is stolen from a locked room and one of Jane's friends is wrongly accused of it.
What I liked:
Overall, a great read for young readers who love a great mystery and for Jane Austen fans who will enjoy this new take on the celebrated writer's work.
Posted by ashkrish at October 04, 2021 No comments: 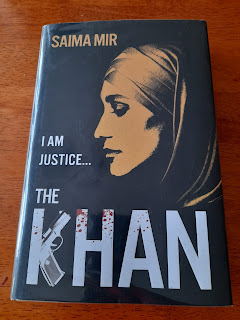 N
An arresting cover and a brilliantly told story! The buzz around the book was so much that I was worried I would be disappointed once I opened the pages.  I read it within three days, totally immersed in the world and the story.

Jia Khan had severed her ties with the family. She lived alone, is doing well as a lawyer and would have continued to do so, had it not been for her sister's wedding. But now that she is back at the family home, she finds that the very reason that forced her away is now getting her to stay back.

I can only suggest you to pick it up and decide for yourselves. You may fall in love with it like me or take a strict stance like my book club friends, but you cannot ignore it. Definitely worth the time.
Posted by ashkrish at August 30, 2021 No comments: 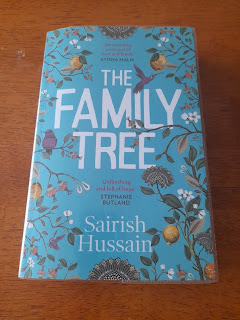 I heard Sairish Hussain at the Platform conference and was impressed by her writing process and her passion to tell a story that did not have any of the stereotypes that seems to plague South Asian fiction.

The book was shortlisted for the Costa prize and has been very well received.  I just finished it and found it to be just as beautifully layered and structured as it pretty cover.

When the story opens, Amjad has just lost his young wife and is cradling his newborn daughter in his arms.

His son Saahil is his support and Amjad begins to build a life that sees his children well settled in their future. However, one accident changes their lives forever taking them in directions with some devastating consequences.

Will the family be able to get through it and become whole again?

Loved the opening chapters that takes the reader into the life of this British Pakistani family as they are picking themselves up from a tragedy. I found myself invested in the characters. Every one of them, even the minor ones are memorable as the story moves from one decade to the next.

I liked how the story is weaved in with the topical events of the time, which clocks the perception of the British Muslim public and tells their side of the story. It is amazing how Hussain uses her characters to express the Muslim view of the heavily politicised events.

It tackles some big themes of grief, homelessness and addiction through her characters which adds depth to her novel. The pain and the anguish comes alive in those pages and this is down to Hussain's storytelling skills.

Overall, a fabulously constructed story. I loved how the action and drama accelerate towards the latter half alternating between two different scenes, resulting in a well constructed finale.

An engaging, layered narrative that grips the reader till the end.  I can easily see it as a TV series.

Sairish Hussain is writing her next. I will be definitely looking out that one. 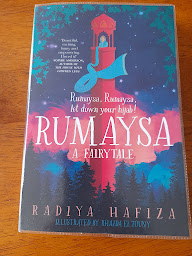 A refreshing take on an age old fairytale
What if the golden haired Rapunzel is actually a dark skinned Asian girl who lets down her hijab instead to get out of the tower? This is the premise of Rumaysa - a fascinating debut cleverly brings SouthAsians hues to a well known story.
Gist:
A dark skinned Asian girl trapped in a tower is looking for a way to escape. She finds a way out and discovers a magic carpet outside but there is no knight in shining armour instead a friend who gives her a necklace that tracks down people in need.
And then begins her adventures. The book is divided into three independent stories and though the first one is of Rumaysa, she weaves in and out of the other stories, more like a faciliator instead of a rescuer, helping the characters take control of their narrative.
My review:
Radiya Hafiza's sparkling debut offers a refreshing twist to age old fairytales and is divided into three sections. Readers will recognise well known characters as they follow Rumaysa's story and then follow on her adventures. Though stories take off in a similar fashion they do not end up the same way.
I was not expecting the twist in the second story or the third and was pleasantly surprised to find one. You can see shades of the writer's skills colouring the story while retaining the fabric of the original story which I was thought was amazing.
It is a great read, ideally suited for 9-11 year olds, full of action and adventure.
Posted by ashkrish at July 15, 2021 No comments:

Tamarind and the Star of Ishta 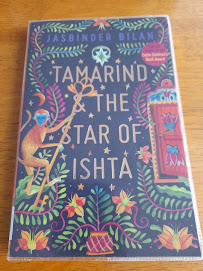 Yet another gem from Bilan!

I absolutely loved Jasbinder Bilan's debut novel and so did my then 10-year-old daughter. Hooked on to her stories, we were eagerly waiting to get our hands on her latest novel and enjoyed reading it.

Tamarind is nervous. She is travelling to India to met her Indian mother's family for the first time. She was very young when her mother died and she is looking forward to learning more about her through the family. But she soon finds herself battling a thick shroud of secrecy and walls of silence. There are some clues though - an overgrown hut, a star shaped ring that glows and a strange girl who calls herself Ishta. Will tamarind get to the heart of the secret at all?

I loved Tamarind right away. Bilan gets into her head remarkably well, with her numerous questions, her unease with everything Indian and the natural curiosity that works as the trigger. The characters of Arjun and Sufia are nicely drawn too.

I also loved how Bilan gently takes the reader through difficult situations and helps them confront difficult emotions. Bereavement, changes in family structure are tough for young children and this book plays a very important role in helping the young reader understand it.

The element of magic realism is nicely handled. It is amazing to see how the magic stems from the memory of a loved one thereby grounding it in reality.

The story also plays an important role in teaching the reader about the Indian setting, making the culture more accessible to the reader. 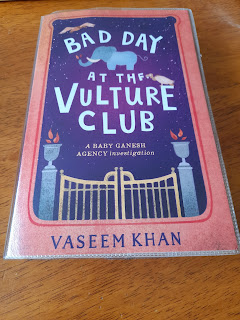 A superbly crafted novel, with a heart.
I love Vaseem Khan novels for the way he tells his his stories. Baby Ganesha agency's investigations are light and breezy with the added advantage of  having Bombay as the backdrop. So, while they are wrapped up in a whodunnit, Khan has beautifully way of interwining the city with it.

I was hooked ever since I read the first one. This is the last book in the Ganesha series and what a way to end it. As I moved from one book to the next, the storytelling is more nuanced, the style more layered and the narrative full of laughs with a slight undercurrent of social issues. Not many whodunnits do that and that is one of the main reasons why I love the writer and his work.

When Perizad a Parsi heiress comes to Inspector Chopra to reinvestigate her father's death,  Chopra doesn't realise that he will end up unearthing some dark secrets about the Parsi community.

Whether it is the museum or the Film world, each Baby Ganesha book is a love affair with the city. This one is no different. Vaseem Khan sets his story in the Parsi community, which not many know is a decadent but critical contributor to the city's financial foundations in the past.

I particularly loved the way he introduces the Parsi culture through the dilapidated building.

"Time's inescapable embrace shimmered around the facade: in the crumbling plasterwork, the faded paint, the creepers that wound unhindered between the rusted railings of the wrought- iron gate."

I could immediately picture the place, its declining glory and the feeling that it harboured many secrets.

The story was set in the Parsi community and that meant it would have rich cultural influences in terms of food and practices which was a delight to read.

The characters as usual are distinct, the twists  and it is amazing how the story moves away from the community into the general population and back so seamlessly while keeping a tight rein on the plot. It says a lot about the writer's ability to weave such a story. Absolutely loved it!

While traffic is a perennial topic, he also uses the story to highlight the Poo2loo campaign, which comes with a helpful author's note at the end. And that for me, is a big plus. The reader gets the whole package - entertainment value in the case of a well crafted whoddunit, an insight into a less known community and a social issue which adds to the reading experience.

This is my favourite of the lot and as Vaseem Khan moves on to a whole new series, this fan is going to be definitely looking forward to his next!