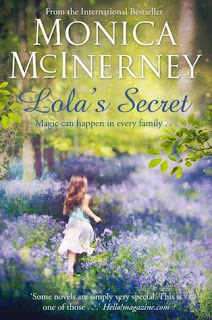 A warm hearted sequel about the Quinlan family.

If you have read its prequel, Alphabet Sisters it will make more sense. I did, a long time ago. I also read its sequel Trip of a lifetime before reading it. So it was kind of inbetween for me. But then that did not feel like a disadvantage. It still worked as a standalone for me.

Monica Mcinerney's books are all about the domestic sphere. How the dynamics of a family - full of different individuals operate as part of a bigger network as the family. It is a feel good well written novel and Mcinerney is very good with this.

Lola the grand matriarch of the Quinlan family has a secret plan. All around her, her loved ones are battling their private wars. Her granddaughters are struggling with motherhood, whereas her son and daughter want to retire. All around there is chaos and she is the one keeping the boat afloat, the connecting thread that runs through them all.

She decides  to send them all away for Christmas and manage the motel on her own. Her idea? issuing invites to random strangers. Sounds bizarre? But that is Lola Quinlan for you.

What works:
What doesn't:
A feel good weekend/beach read. I found this better than its prequel and sequel.