The Wheel of Fortune - Susan Howatch

A tattered looking copy hidden among bestsellers on a charity book shelf. That is how I came across this little gem of a book.

Howatch has been a favourite. I adore the way she breathes life into characters with their little quirks and personalities. Her books are usually sagas and make for an enjoyable read. When I picked up her book with this in mind, I was not disappointed. 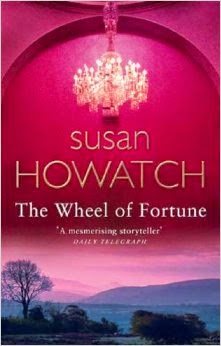 The wheel of Fortune is about a mansion called Oxmoon and the dysfunctional family that inhabits it. Starting from Robert Godwin, the maverick heir, the story takes the reader through each generation from the 1880s to the two world wars as the characters make some life changing choices that affect the next generation with consequences.

The book into divided into narratives of main characters and Robert Godwin, Ginevra, Hal and Kester stay on in your mind for a long time. Perhaps it is because the authors builds a close relationship of the reader and the characters as one follows their triumphs and failures to secure the "epitome of happiness" - possessing the mystical and magical property called Oxmoon.

There is something about old novels that I like. The story is focused and supreme with zero emphasis on style or packaging often found in contemporary novels.

Howatch understands the dark corners of the human mind so well and puts it all out in a rather convincing manner. If, like me, you are a crime thriller buff or love a good story, you will enjoy this.

A great story, a fascinating read.
Posted by ashkrish at February 14, 2015