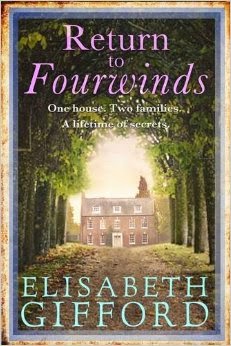 An atmospheric novel about family secrets.

This is my third novel in a row, for review in the family saga genre and I couldn't help but compare them. The three novels. Moriarty's Last Anniversary. Mcinerney's Hello from the Gillespies and Gifford's Return to Fourwinds deal with a similar theme yet they are distinct in their own way.

Where Last anniversary is more plot driven with a bit of suspense, Hello rides high on emotions and the characters and Return to Fourwinds, has underlying complex themes set in wartime atmosphere and a clash between the working class and the gentry.Gifford weaves a very atmospheric tale which has the past and present narratives running alongside giving it soft layers and laden with themes.

The families of Nick and Sarah have come together to celebrate their wedding. However, things don't go to plan and then the wedding is about to be called off, it throws open some secrets from the past. Both families have known each other in another era and the past finally catches up with them forcing them to confront repressed memories and deeply buried secrets. Ranging from the war time to the academic atmosphere of Oxford, there are various themes in the novel, the relations between the working class and the upper classes.


A great story and extremely enjoyable read. I am glad to have discovered her through goodreads and look forward to her next novel with interest