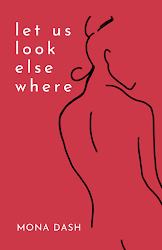 Acclaimed author Mona Dash is an author-poet who has already published a memoir and two poetry collection. Now for the first time her debut short story collection is being published by Dahliabooks which contains all her prize-winning stories in one place.

Let us look Elsewhere is a delightful set of stories from round the world with themes ranging from desire, disconnect, sense of belonging and home.

The first piece, Let us Look Elsewhere, is almost like an “Empire writes back” piece where Dash claims her right to choose her stories instead of narrating tales expected of her. Sounding audacious at first, it builds a very convincing case that leaves the reader impressed and delighted about what is to come next.

The stories that follow are bold, often sexual with an undercurrent of longing. In  “That which is unreal” a woman services men on Skype and Whatsapp while yearning for a lost love, whereas “Lovers in a room” a high flying woman flits from one man to another hoping for a connection. Strong on setting “Inside the city” juxtaposes the protagnist's life against glittering, volatile exterior of Las Vegas .

“Sense of skin” begins with killing animals to sell their skins but eventually becomes a tale of self discovery. “Golems of Prague” on the other hand focuses on the looming threat of AI, how it first invades the protagnist Ivana's work and later seeps through her personal life too.

Dash skilfully handles historical fiction in "The Boatboy"  where she resurrects a forgotten martyr from the British Era through this tale of rebellion and courage.

The stories are neatly laid out - beautifully crafted gems adorn this crown of a collection. But the most impressive aspect of the collection is a combination of confidence and conviction - confidence in her craft and the conviction with which she tells her stories.

A fascinating, bold debut that enthralls the reader right from the outset.

You can pick up your copy of Let us Look Elsewhere from Dahlia books.